The ecosystem of cryptocurrencies is developing rapidly. But with more functionalities and a bigger crowd, the challenges for the industry are becoming more and more complex. Our Business Developers Dorota Uszyńska and Maciej Jamiołkowski explain how the market is changing, why crypto is on the rise and most importantly—how to protect crypto businesses from fraudster activity and avoid losses. 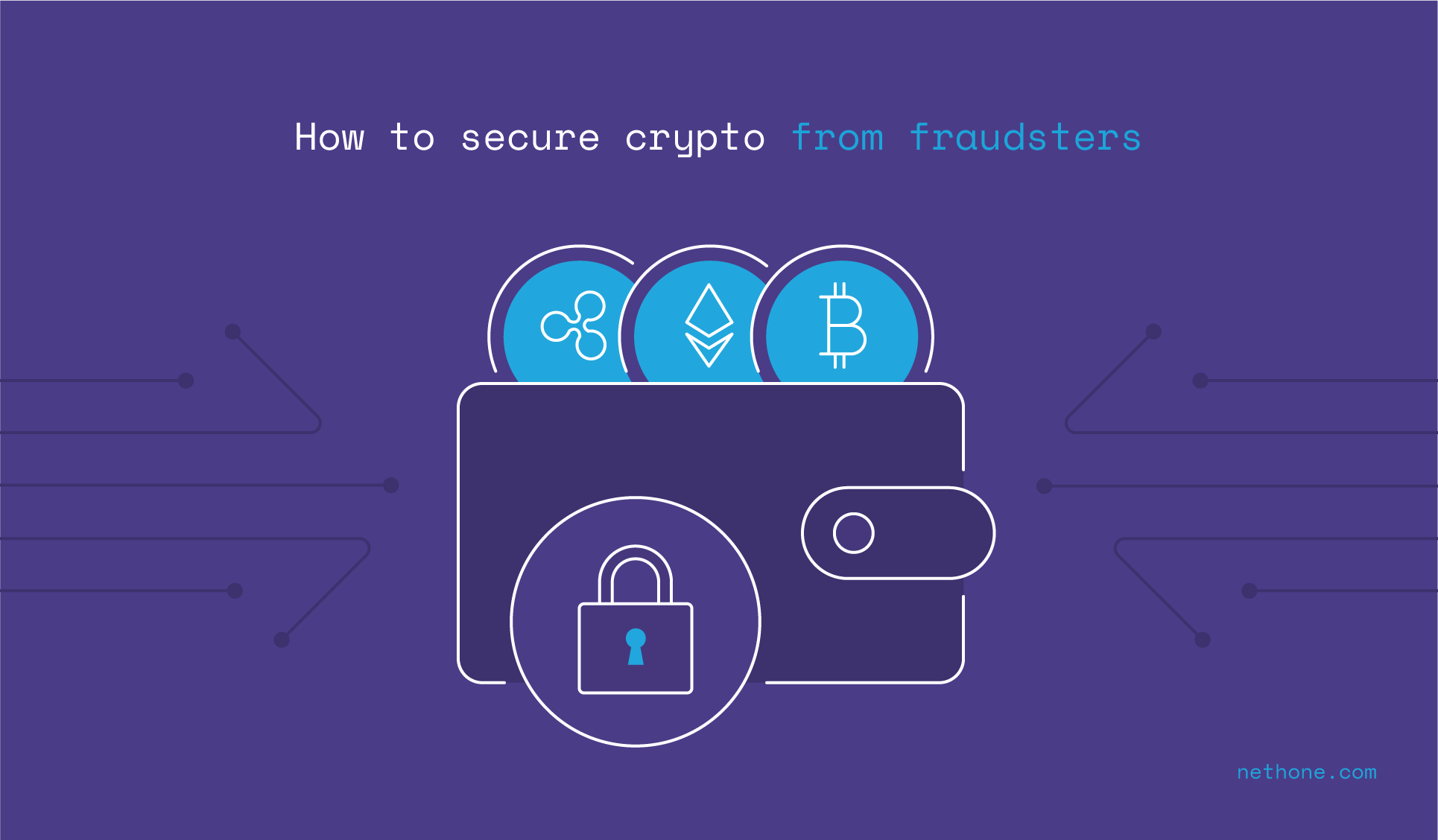 The rising problem of crypto fraud

DU (Dorota Uszyńska): Cryptocurrencies are on the rise. As of the end of September, there were over 54 million cryptocurrency wallets users all over the world, and the number is still growing! In May 2020, the market cap was worth over $265.5 billion—with Bitcoin being the largest shareholder of over 68% of the market. Impressive, right? What if I told you that BTC accounts for $6 billion of daily online transactions and it is the third largest share of payments right after Visa and MasterCard? Even American Express shares less of the market.

MJ (Maciej Jamiołkowski): You and your numbers ;) Let’s take a closer look at what makes crypto so popular. The last few years have brought us several events that made cryptocurrency not only popular among its users, but also among amateurs. Of course this is mainly due to Bitcoin - the queen of cryptocurrencies. At the end of 2017, Bitcoin was on everyone's lips when it started its crazy voyage from $3,500 to almost $20,000 in less than 3 months! It aroused the appetite for easy earnings of many speculators, but also people who had never been interested in cryptocurrencies before and had not seen significant value in them. The recent halving also brought a large group of new users who hope that Bitcoin will behave as ideally as after the previous halvings and will multiply its value.

It’s not only Bitcoin—we also have Altcoins like Ethereum, Litecoin, Cardano and many more that tempt with a lower price and can really go crazy with increases in value. The upcoming release of Ethereum 2.0 is also fueling the appetite of investors and Decentralised Finance (DeFi) app developers.

All this combined with easily accessible cryptocurrency wallets increases the popularity of digital currency, but so far rather as an investment instrument than everyday money. But who knows what the future will bring? Back in 2014, cryptocurrencies were just a drop in the ocean of the financial world.

DU: Also, there is one more very important aspect...

Diminishing trust in traditional money and the switch to crypto

DU: Let’s take a look at some emerging market examples. Did you hear that Turkey is the country with the highest rate of cryptocurrency adoption?

MJ: Yeah, so you can observe that the original assumption of cryptocurrencies finds its supporters—decentralization and independence from banks. Turkey’s economic situation has massively affected its currency. Many people in Turkey see cryptocurrency as a way out of economic downturns and so they invest massively in crypto. Take a look at this chart—there are crypto peaks every time there’s a serious weakening of Lira. 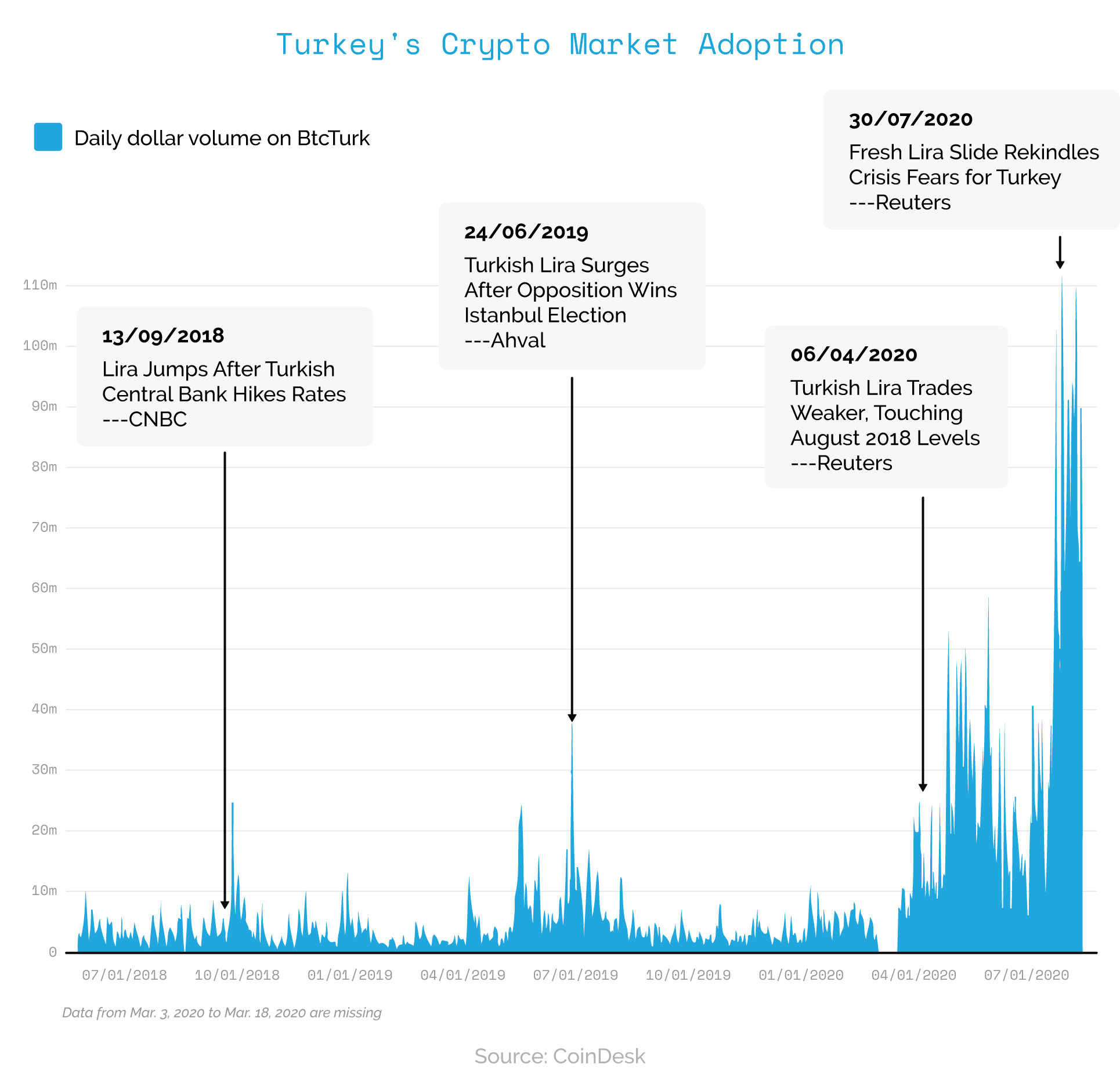 DU: Exactly! And the statistics of cryptocurrency adoption show that 20% of Turkey’s population now has knowledge about cryptocurrency – the highest amongst all countries! That is a great example that crypto popularity correlates with the economic/political situation. Though, as we spoke before, “crypto rush” often brings inexperienced users. Easier to hide in a bigger crowd

MJ: Yeah, and the bigger the crowd, the easier to hide for fraudsters. In 2019 alone, $292 million was stolen from 11 major crypto exchanges. And this vertical will be attractive to fraudsters.

DU: Cause it’s not regulated enough?

MJ: I’d say it’s barely regulated at all. Cryptocurrencies and blockchain have been around for a long time, but you can still say that it is like the Wild West. While some administrations maintain a generally friendly attitude towards Bitcoin by issuing guidance to support its use, others remain hesitant without issuing any official decisions regarding legality or acceptance. Even more, some governments believe that the cryptocurrency would eventually allow it to lose economic power and move towards decentralized economies around the world. Several countries, including China, Russia, and Colombia, have even banned Bitcoin and other cryptocurrencies, completely outlawing their use and investment.

Cryptocurrencies in the Darknet

DU: Also, I MUST say it—crypto is the currency of the Darknet, so the currency stolen from someone’s wallet wasn’t stolen solely for the sake of stealing but usually to invest it in other criminal activities. Did you know that Bitcoin transactions on Darknet Marketplaces (DNM) jumped 65% in value during the first quarter of 2020? Also, the adoption of mixer services is rapidly growing.

DU: However, apart from the individuals, there are also crypto wallets and exchanges who suffer from this fraudulent activity. And not only because of the losses, but also because of the lowering credibility of their businesses and obstacles to maintain their partnerships.

MJ: Correct. A lack of regulations, huge amounts of money and the temptation to earn a quick income made us witness the collapse of many cryptocurrency platforms over time, and with them millions of dollars of users' money. In addition, the popularity of cryptocurrencies in the Dark Web increases the risk of fraud or money laundering. It does not help build confidence in the novelty of cryptocurrencies for most financial giants. And in order to make the product available to the widest possible audience and to be able to ‘commercialize cryptocurrencies’, it is necessary to cooperate with PSPs or banks and gain their trust.

How to secure crypto companies?

DU: Right, so let’s identify the most common pain points and how these companies can prevent losses, secure revenues, and finally—build much needed credibility.

MJ: To do that we need to understand the two most fragile areas for these companies where users interact with their service: exchanges where users buy the assets and wallets where they keep their money and make transactions. Until last year the main problem was connected to the exchange of FIAT money to crypto but now we also observe an enormous rise of account takeover (ATO) issues. Moreover, many entities decide to implement credit cards in their exchange platforms, and cards are the favorite tool in the hands of fraudsters.
So there are 3 crucial interaction points to cover: the moment of registration and login attempts, the payment during an exchange and the transactions made from a wallet. 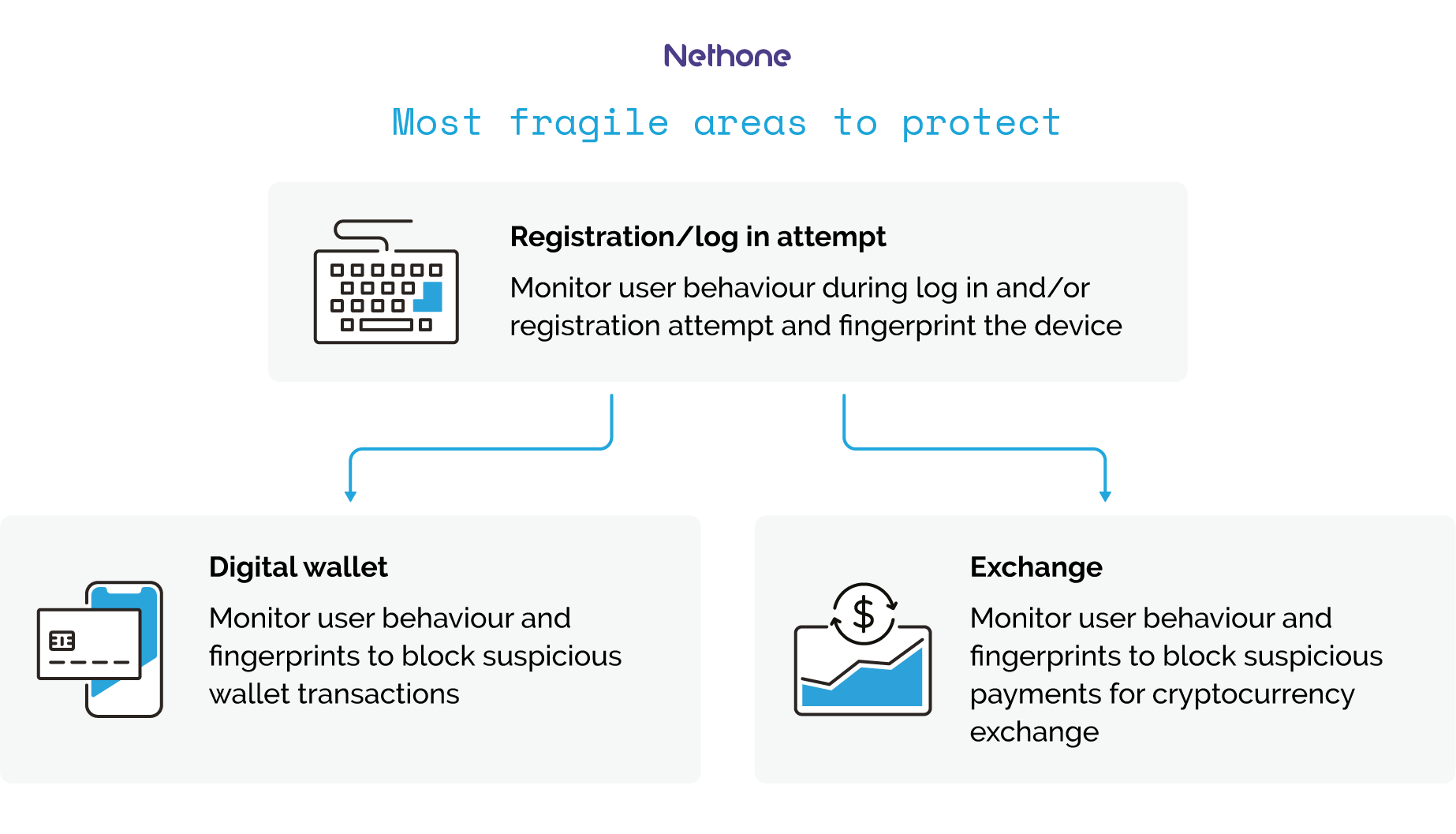 DU: But with payments and transfers, it is very important not to kill conversions. A proper anti-fraud defense should gain insights about the customers from a technical layer of their session and analyse it in the background. This way, a company is provided with additional, non-declarative data, e.g. the way a user behaves if it is a bot or a human being, but also can detect some fraudulent device setup and software, and the new fraud “trends” and patterns. And that can help to prevent chargebacks and/or disputes and increase their credibility for banks, Payment Service Providers or card issuers.

MJ: Yes, and for Account Takeover issues, it is extremely important to understand the uniqueness of user interactions with the website or app so a company can block suspicious logins and ATO or even create a new account, but at the same time does not add any friction for the legitimate users. Otherwise, they’ll look for some other wallet that is easier to use (cause let’s be honest—most users choose convenience over security). So crypto companies should take a close look at each session of the recurring user, to create their individual behavioural profile and device fingerprints, and compare it every time they try to log in.

DU: And all of that without breaching the most important thing—users’ anonymity.

Crypto is (and will be) growing. And fraudsters double their efforts to attack crypto companies from various sides; starting from infrastructure security, through online SCAMs, taking over legitimate users’ accounts, up to exchanging money from stolen cards for crypto. And it doesn’t impact end users only, it heavily impacts crypto companies’ brand and credibility, bringing huge losses. It’s time to secure your wallet or exchange without adding any friction to your customers and without touching their anonymity. 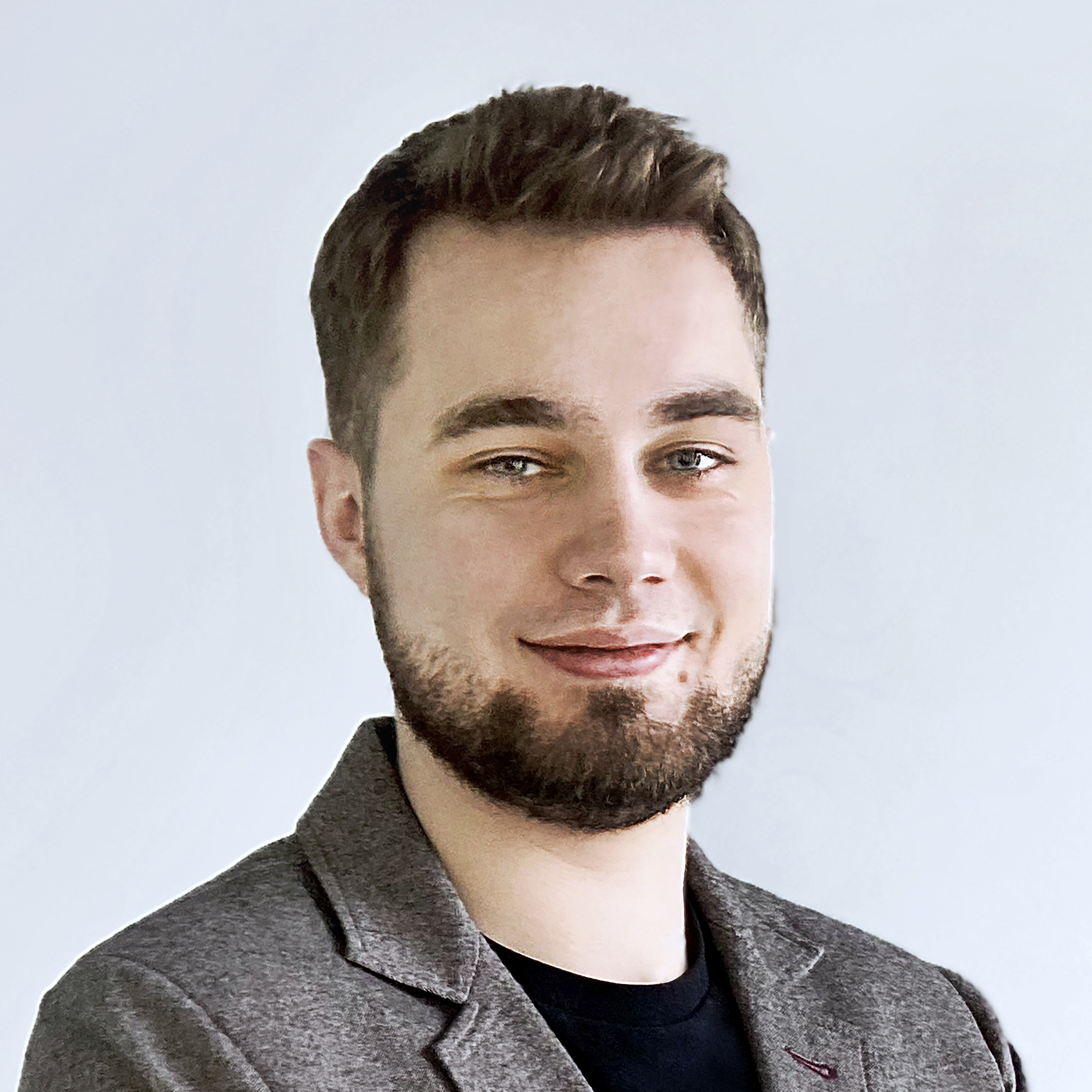 Bite into the world of blockchain with Crypto Talks by Nethone!

Get to know the secrets of blockchain with Crypto Talks by Nethone and explore the endless possibilities of modern financial models.

If you sell products online, the time is now to prepare for the Cyber Monday traffic flood. It's an opportunity to learn & boost revenue